There is hope for the future of computing in Ireland, at CoderDojo Cork I actually found a desk that was more cluttered with the future than my own desk at home. 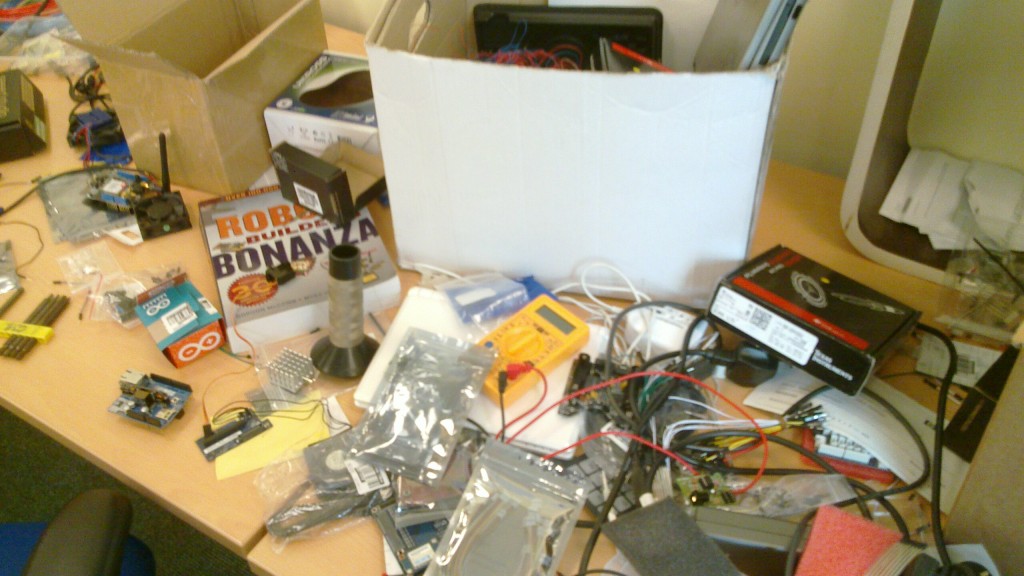 A posting from Bernie Goldbach Powering the Information Age reminded me about the nature of the Internet. The underlying structure of the Internet is distributed, fault tolerant networking, initially intended to continue operating after a nuclear war. In the current climate, it routes around ‘damages’ like ‘censorship’ firewalls, and corporate throttling of bandwidth.

But one of the other things it’s good at is distributed computing, two nodes in the same domain can be geographically separated by an entire planet. This seems to escape the mindset of current datacenter deployment. While it might make sense to concentrate servers into small areas, in an energy constrained world perhaps powered by distributed power sources, it doesn’t. the loss or degradation of the power source to a datacenter places it on the back foot operationally, constrained to secondary generation, it server’s, all the server’s in the datacenter become vulnerable to the same ‘outage’ which the Internet will also treat as ‘damaged’ and route around.

Given a properly functional broadband infrastructure, servers located at the endpoints of the networks will as a whole, be less likely to be dropped from the Internet as damage. The likelihood of power being eliminated from a large distributed server domain is also contained. In a potential alternative energy future where solar and wind could be the primary source, distributed ‘green’ servers fit the requirement.

I have been, and will continue to be amused about the Storm over Big Brother database. Amused because I know ultimately that it will fail to stop terrorism, but also that I know how easily such a system can be overwhelmed into oblivion. The only reason for these databases is for political control, not for protection, but political gain. Security Theater, and nothing more.

Consider for a minute, should someone discover a method to product Weapons of Mass Destruction out of say, peanut butter. A database would have to track the purchase and use of every gram of peanut butter, and latter peanuts, raw and roasted, and then farmers who could grow peanuts. The data would grow exponentially and it wouldn’t find anyone who could or does produce WMD’s from peanut butter. It wouldn’t even be able to detect that the Peanut butter Bomb was a hoax.