This is my ELF Membership card (in the black box) running a 12 byte program that adds up to 255 then turns off the light, normally this would be about 1 per second, but I’ve been tweeking the speed dial as it has no ‘realtime’ clock. Using this in comparsion to the new Arduino Uno running it’s ‘Blink’ program. It is blinking to a realtime clock timed to the 1000 of a second and matches the ajacent clock. The Arduino (aside from the 1024 byte boot loader) required 998 Bytes to perfom it’s feat.

What can I say, it works, See here , and it’s SOOOO productive. I’s amazing that it makes me feel good that I managed to reproduce/assemble a kit of this nature. I grew up with this sort of thing, and couldn’t afford to participate with this technology. It wasn’t until latter that I bought my own Apple II+ (another story) with my own money.

This is my Monday effors of concerted soldering my neck is stiff, and I have a nice blister on my right hand index finger from fumbling the soldering pencil, but I managed. I thought I had a power source conector, but my failing memory…. power test today sometime, then searching for any cold solder joints and shorts. Wishfull hoping for a first time success….

UPDATE: It does power up, and works, however I have a loose connection in the power plug I built so I have to build another, better one tomorrow.

The wife needed proof that I do ‘kitchen’ work 🙂 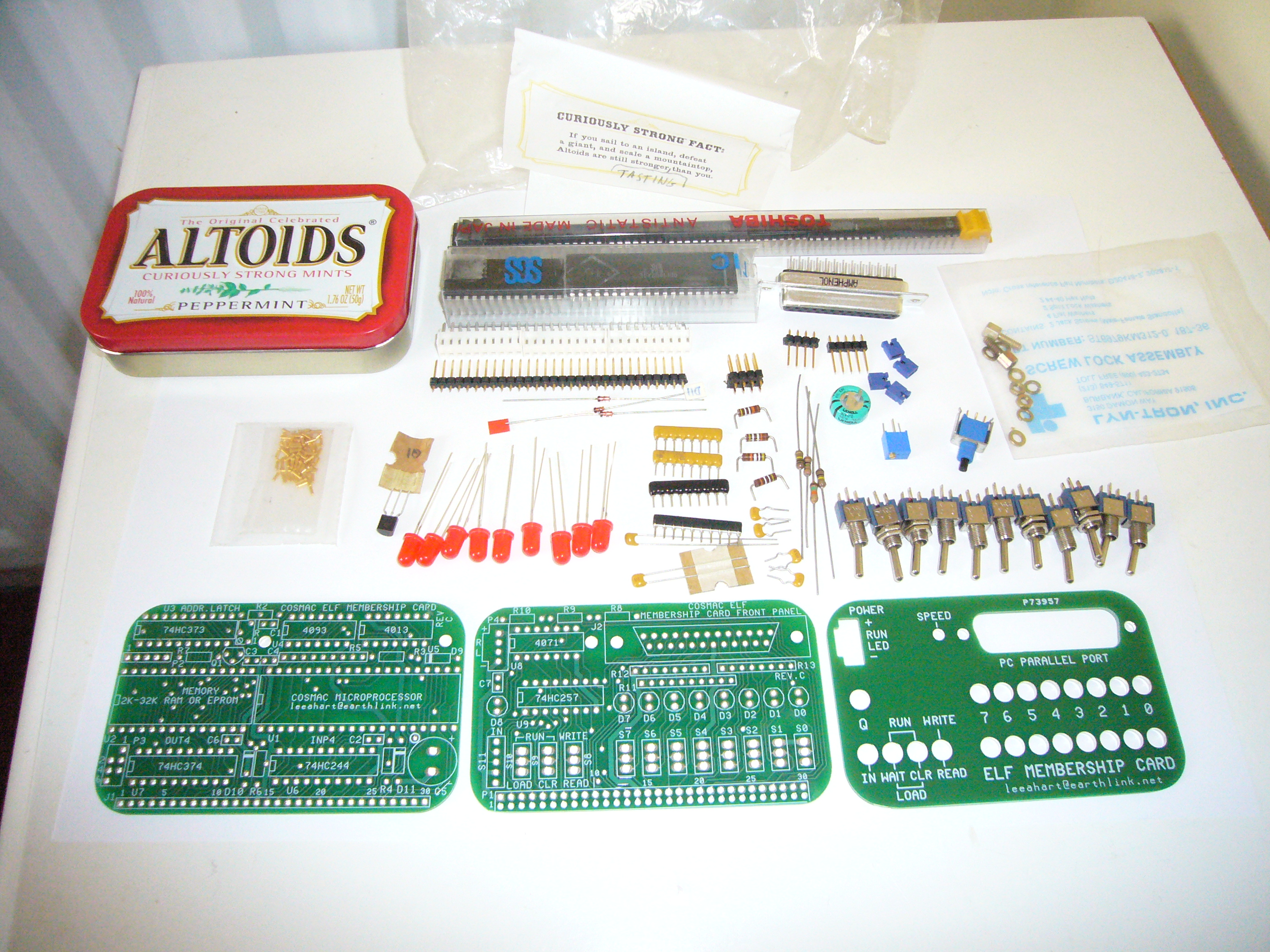 Now where did I put that soldering iron….

Over the past few years there has been a subject called Technological convergence not to be confused with Technological singularity In one aspect that event has happened to me this year. Because no one noticed, I have been pretty sporadic with posting on this site. Some of the reason is work related, more of it has been due to me being overwhelmed with events in and out of my control. And others have been due to some health issues.

During and between these events, I’ve been without my laptop (for some the sole source of internet communications). However I have not been without my mobile phone. But to call what I have, just a mobile phone, is questionable. I have a Nokia N900, more a small internet tablet than a phone and it has been a complete, in fact more than a complete replacement for my laptop. For more than 50 days and nights this year I have used it for email (4 POP, 2 Goggle, 1 Office) Web Browsing (Nokia, Firefox and Opera) and specialized apps for WordPress (2 blogs) Facebook, twitter ( 3 different clients) RSS readers, Podcasting, Music playback (several) internet Radio, Movie watching, Bookreading, IMing (Yahoo(2), AIM, Buzz, facebook) GPS, FM radio, Skype and Moble Telephony (telephone, who knew)

In fact, more things than I can do on a laptop, for 50 days this year I’ve been entirely ‘converged’ on my phone.

I have come to the conclusion that if Android encounters a WiFi point that does not have WEP/WPA security, but instead, uses some corney web based HTML login code or password, Android goes bonkers.

Because Android is a very connected OS, the first thing that it tries to do on receipt of an IP address, it attempts to connect to Google services, and fails because it’s not fully on the Interet until it submits the correct HTML code. So the Android framework, that almost all Android apps depends on, Fails! And because the framework fails, the various browsers fail, and you can’t get to the login page to enter the unlock code to the portal, because you have no working browsers.

I took the plunge and re-imaged my Cnm Touchpad II up to Froyo (Android 2.2.1) , And after the second try, it installed, after sweating bullets. And not only is it pretty, it’s faster, and I (after some efforts) now have the Android market.

Mind you the CnM Touchpad II is NOT the intended target for this upgrade, and I lost the use of the internal microSD card, and the fullsized USB connector to the builtin software, but I restored most of the functionality with additional downloads from the Store.

I actually like the upgrade so much I will host it here: apad710_froyo_v3.img

As you can tell this image is for a APad 710 which is really an exact copy of the CnM Touchpad II, however this image is ‘hacked’ and ‘rooted’ and ready to roll.

The recent Blowup about HP exiting the PC/WebOS Business reminds me of an old story about when Sony bought MGM, the movie makers.

The story goes like this; executives were briefing Sony Management about how profits were generated from the Movie Making business. One accountant described the process such;

“Well we make a hundred movies a year, about 10% are Blockbusters and we make millions, 60% make a modest profit, and pay for themselves, and the about 20% Lose a small amount, but help maintain our reputation, and then there are 10% that are serious bombs.”

The Japanese executives looked at each other and carried on a small side conversation and then stated;

“We only want to produce Blockbusters”

HP is like this, they only wanted to produce Blockbusters, as if this was merely a simple decision, “We only want to make Blockbusters”. As if there was no effort involved, no trial and error involved. And when the first effort fails, quit and run from the first attempt as if shedding the failure is the only responsible choice.

And I thought that the Executives of Sony and Nokia were failures, Looks like there is a Plague of idiot CEO’s out there.

Will the Real Stephen Elop, Please Stand Up?

I couldn’t on my best day, speak to this better than this article.

If anything it should speak to any CEO/CFO/CTO that arrogantly enters a new company environment with preconceived notions of what strategy should be applied to their new positions. So this article isn’t just about Nokia, it’s about ignorance of facts.

I have been observing a vast increase in traffic, traffic without apparent purpose, over the last several weeks.

And I didn’t give it much thought. However I now know that its MSNBot a Bing Robot that is deeply scanning all my postings. But it’s not very thorough.

Has anyone else see this in their site statistics?

In my previous posting, I mentioned all the things this pad can’t or rather doesn’t do. To make this all balanced, I will put what it can do, into perspective.

For Instance, at a cost approximately the same as a Amazon Kindle You still get The Kindle eBook market.
… but then you get;

You can even play Games on it, who would have thought. And it has not added a single pence to my credit card. But I still don’t have the the ‘Google Market’ even though the calendar, contacts and Gmail still sync up with Google.

We received a letter in the mail recently informing us that our DSL connection was scheduled to be upgraded to 8Mbits from the current 3Mbs, and without charge. Last weekend it happened, however they are doing it in stages, or else they couldn’t get their equipment to speed up that fast. So we are left with a ‘configured’ speed of 5Mbits (download) / 512Kbits (upload) which in real terms works out to 4.42Mbits down/ 410 up (see below) 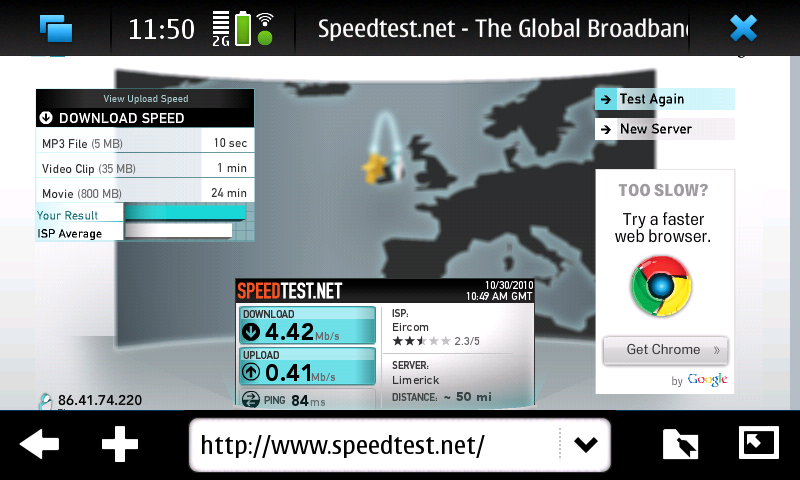 But, what the heck, it didn’t cost extra, and it is faster… one can only dream of a vendor who delivers on the promises, reality is another thing.

Talk about geek lust, if I had a wish list, this would be on the top of the list.

Apps, Apps everywhere Apps. There has been a lot of discussion on the internet about the value of Apps. Which are abbreviations for applications, in this case small applications on mobile devices remind me of previous discussions, read arguments, about Client Server applications. These applications in the past were a model, a class of applications to distribute part of the workload of servers to the client. In reality, they had a more important role in decreasing the network communications traffic created by old style server based applications like Web-Apps. Using a client-server, or mobile app, can utilize an API that reduces the actual amount of data transferred between the server and client. And while the flexibility of Web-Apps is perhaps better for the application administration, mobile apps are better for the Mobile carrier reducing traffic and congestion on the wireless network. The current arguments are, that mobile apps are just a passing fad, funny how the same argument was used for client-server. But giving the issue with the Apple Antenna producing poor throughput, apps are what is saving Apples iPhone 4 and the AT&T network

Apple’s Antenna woes stemming from the poor design of the iPhone 4 are well known. But what has just gotten under my skin is this PC World article Antenna Expert: Apple is Right, iPhone 4 Signal Woes Overblown. The article is laced with the next best thing to professional lying, from a group of self professed Radio Experts AntennaSys, Inc The article blatantly claims;

“This was a non-scientific test, but it was done by two engineers who deal with RF devices for a living,”

and then this is where the spin/falsehood is;

“We succeeded in taking a five-bar display and reducing it to one bar by doing that,” Webb says. “But the call remained solid and never dropped.”

In plain sight they note First that they DID NOT DO A SCIENTIFIC TEST that yes, the signal drops, but the call is Ok. As a geek, and one who has been dealing with wireless communications for 10’s of years. This is insulting, and a professional attempt to baffle with bullshit

Speech is divided into 20 (ms) samples, each of which is encoded as 260 bits, giving a total bit rate of 13kbps (kilobits per second). This is the so-called full-rate speech coding


These 260 bit packets are transmitted in serial order with redundancy, so if a packet does not get received, it get’s retransmitted. The data is transmitted into a Time and Frequency Division Multiple Access digital channel. These slots in which the packets of voice are shared are not contiguously serial for each user. So when packets are transmitted they are separated in the channel. So the packet stream must be reassembled at the receiver side to reassemble the stream of packets back into the audio to be intelligible. the packets are chosen to be small enough so that should there be a packet timeout during transmitting/retransmitting the human ear will not detect it.

The professional lie above begins as such, in the use of unscientific terms as ‘the call remained solid’ in reality it never is, they are packets divided in the stream. They may sound solid, but that is due to the nature of human hearing which will fill in any gaps in the sound, and that the actual bit-rate of the wireless sound is very low, about the speed of a dialup modem. This does not constitute much bandwidth and can be sustained on extremely poor wired and wireless connections. It’s a lie to use this as a measure of signal strength. A piece of string and a couple of tin cans, can sustain a voice channel (analog) with no compression at all. Fidelity is in the ear of the beholder, not a scientific result.

When testing the real through put from the defective Apple antenna, the measured bitrate, collision, and retransmitting errors must be tested on a calibrated bench instrument, not by someone clamping their hands around it and listening for the shoe to drop. Someone should tell the ‘Experts’ at AntennaSys to try the same test on a string between two cans, and see if the ‘the call remained solid’ .